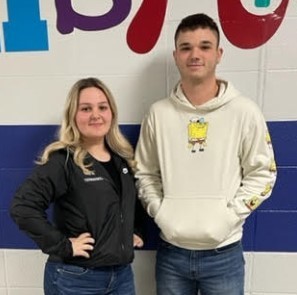 UPDATE:  Macy won the District level and will now compete at the State level.  Congratulations!

Guy-Perkins High School is proud to announce that Macy Briet has won the 2022 VFW "Voice of Democracy" contest. This makes the second year in a row that a Guy-Perkins student has won this award.  "Macy worked for hours on her essay/speech. She really gave it her all.  Coach Nakeia Guiden even did towel pushes in her honor," senior English teacher Amy Crider noted.

Macy will go on to the district level to compete, and if she wins that -- she will be headed to state.  "I really didn't expect to make Mrs. Crider cry when she read my essay, but as many days as I worked on it, I am glad to see it paid off," Breit shared.  Breit is a senior at Guy-Perkins High School this year and plans on attending the University of Central Arkansas in the fall.